Vibrio parahaemolyticus is a common pathogen which has become a major concern of seafood products。 The bacteria in the viable but non-culturable (VBNC) state are unable to form colonies on growth media, but under appropriate conditions they can regain culturability. In this study, V. parahaemolyticus was induced into VBNC state at low temperature and oligotrophic condition, and was resuscitated to culturable state。 The aim of this study is to explore the comparative proteomic profiles of the resuscitation state compared with the VBNC state and the exponential phase of V。 parahaemolyticus using isobaric tags for relative and absolute quantitation (iTRAQ) technique. The differentially expressed proteins (DEPs) were subjected to GO functional annotations and KEGG pathway analysis. The results indicated that a total of 429 proteins were identified as the significant DEPs in the resuscitation cells compared with the VBNC cells, including 330 up-regulated and 99 down-regulated DEPs. Meanwhile, the resuscitation cells displayed 25 up-regulated and 36 down-regulated DEPs (total of 61 DEPs) in comparison with the exponential phase cells. The remarkable DEPs including ribosomal proteins, ABC transporters, outer membrane proteins and flagellar proteins. GO annotation showed that the 429 DEPs were classified into 37 GO terms, of which 17 biological process (BP) terms, 9 cellular component (CC) terms and 11 molecular function (MF) terms. The up-regulated proteins presented in all GO terms except two terms of developmental process and reproduction. The 61 DEPs were assigned to 23 GO terms, the up- and down-regulated DEPs were both mainly involved in cellular process, establishment of localization, metabolic process and so on. KEGG pathway analysis revealed that the 429 DEPs were assigned to 35 KEGG pathways, and the pathways of ribosome, glyoxylate and dicarboxylate metabolism were significantly enriched. Moreover, the 61 DEPs located in 26 KEGG pathways, including the significantly enriched KEGG pathways of ABC transporters and two-component system. This study would contribute to a better understanding of the molecular mechanism underlying the resuscitation of the VBNC state of V。 parahaemolyticus. 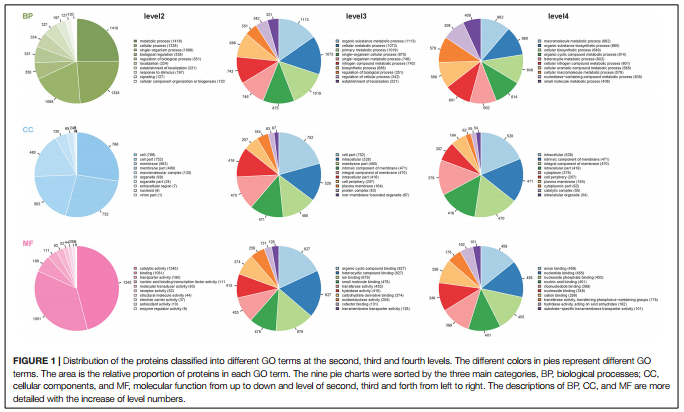