Dysbiosis of gut microbiota and metabolome is a frequently encountered condition in liver cirrhosis (LC) patients. The severity of liver dysfunction was found to be correlated with the degree of microbial dysbiosis。 Several clinical studies have indicated liver function improvement after therapeutic splenectomy for LC-induced hypersplenism. We sought to determine whether such post-splenectomy outcome is pertinent to modulation of the abnormal gut microenvironment in LC patients。 A cross-sectional study including 12 LC patients and 16 healthy volunteers was first conducted, then a before-after study in the cohort of patients was carried out before and 6 months after splenectomy. Fecal samples were collected in hospital. Temporal bacterial (n = 40) and metabolomics (n = 30) profiling was performed using 16s rRNA gene sequencing and ultra performance liquid chromatography/mass spectrometer (UPLC/MS), respectively。 Our results revealed that microbial composition in patients was clearly different from that in healthy controls (HCs), evidenced by considerable taxonomic variation. Along with improved liver function (Child-Pugh score), the patients also displayed similar gut microbiota profile and predicted metagenome function to that of HCs after splenectomy。 Enterobacteriaceae and Streptococcaceae, two LC-enriched families showing positive relation with Child-Pugh score, exhibited significantly decreased abundance after splenectomy. At the genus level, 11 genera were differentially abundant between patients and HCs, but 9 genera of them restituted to normal levels by certain degree after splenectomy。 PICRUSt analysis showed that the relative abundance of 17 KEGG pathways was partially restored after splenectomy。 Four of them were amino acid-related pathways: lysine degradation, tryptophan degradation, amino acid metabolism, and protein digestion and absorption。 These findings were supported by metabonomics results which showed that relative abundance of amino acid and corresponding catabolites changed toward normal。 In addition to the variations in the relative abundances of bacteria and metabolites, the correlation between them also altered in patients after splenectomy. Dysbiosis in gut microbiome and related metabolism of LC patients was partially corrected after splenectomy。 Whether the improved gut microenvironment could prevent LC-related complications and delay the progress of LC is a propitious objective for future study. 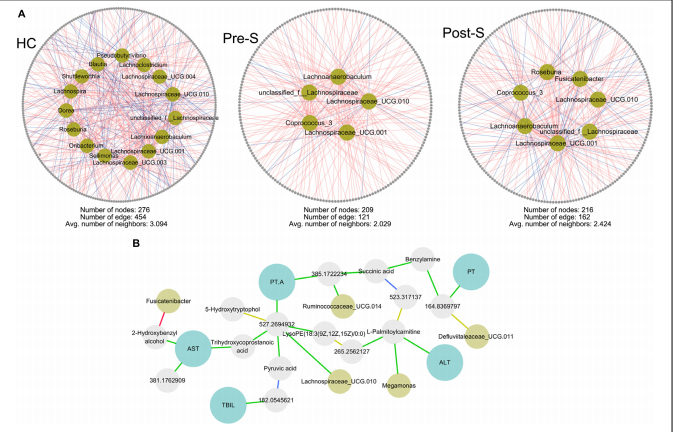 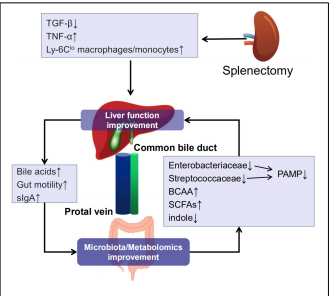